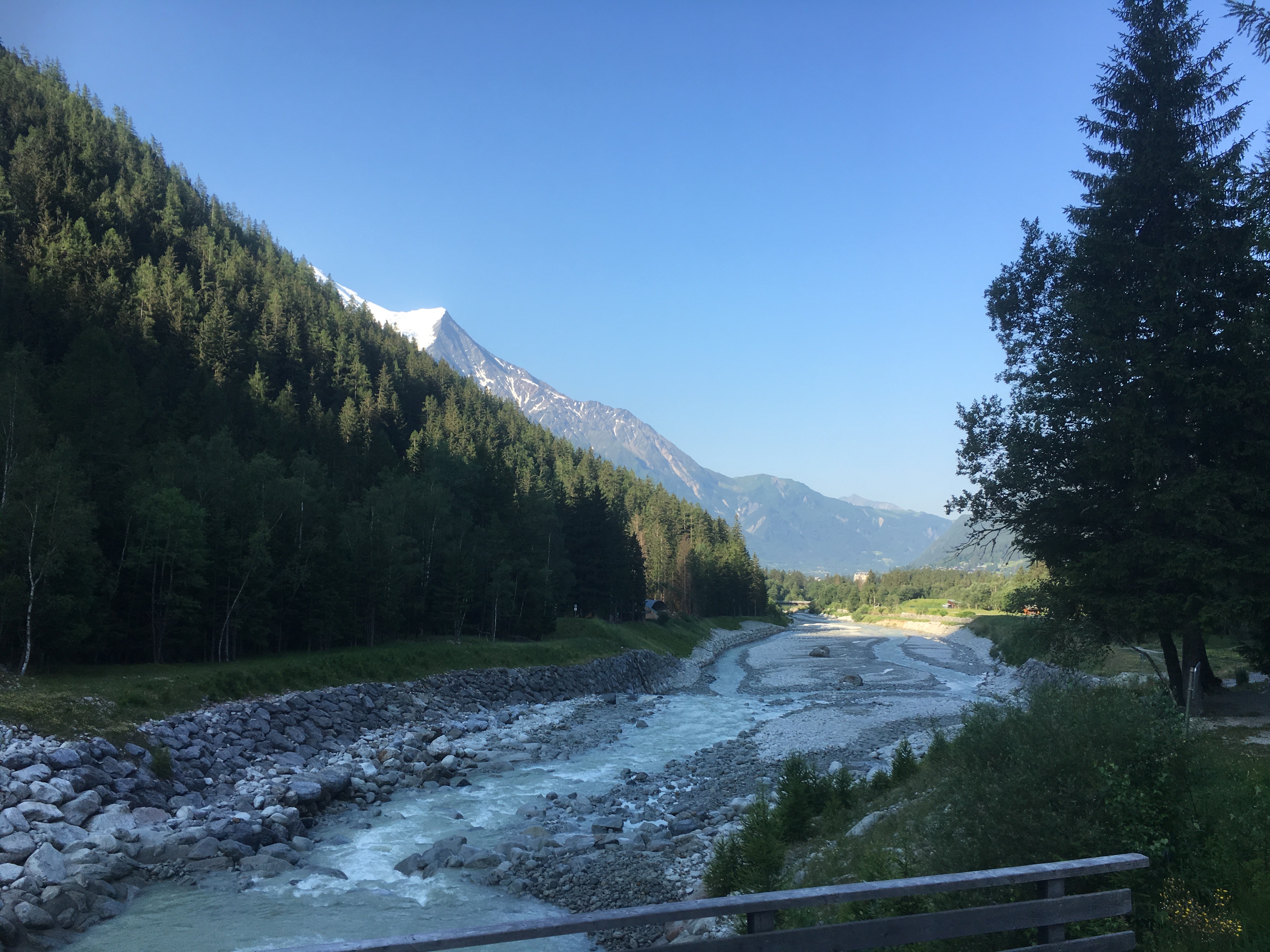 There are certain milestones you reach in your running career that are nothing short of monumental. One such milestone is the first marathon you complete. You pick your marathon months in advance and begin the long arduous training to reach the fitness level required to complete it. The marathon I chose to mark this milestone was the Marathon Du Mont Blanc.

The Marathon Du Mont Blanc is a trail marathon with a distance of 42km, a vertical climb 2730m, and a 1700m decent. Given I hadn’t run anything near that distance before and my trail running experience to date was very limited, you could say I chose an ambitious marathon. 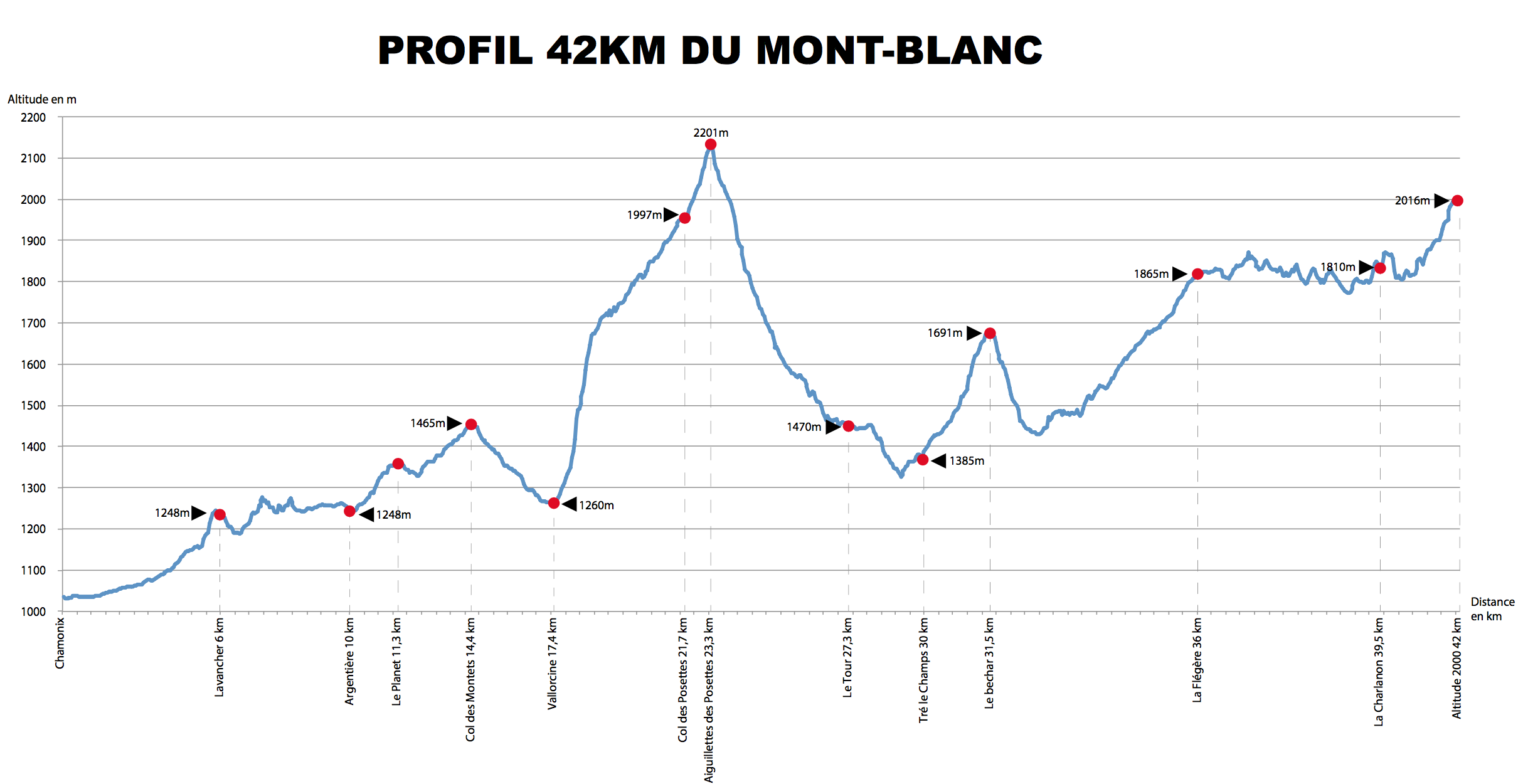 Chamonix is widely regarded as the Mecca of trail running and when you arrive there you can see why. Every second or third shop is geared towards trail running or hiking (no exaggeration!) and most trails provide breath taking vistas of the valley and Mont Blanc itself. And if you plan ahead you can find cafes and chalets nestled in the side of valley. 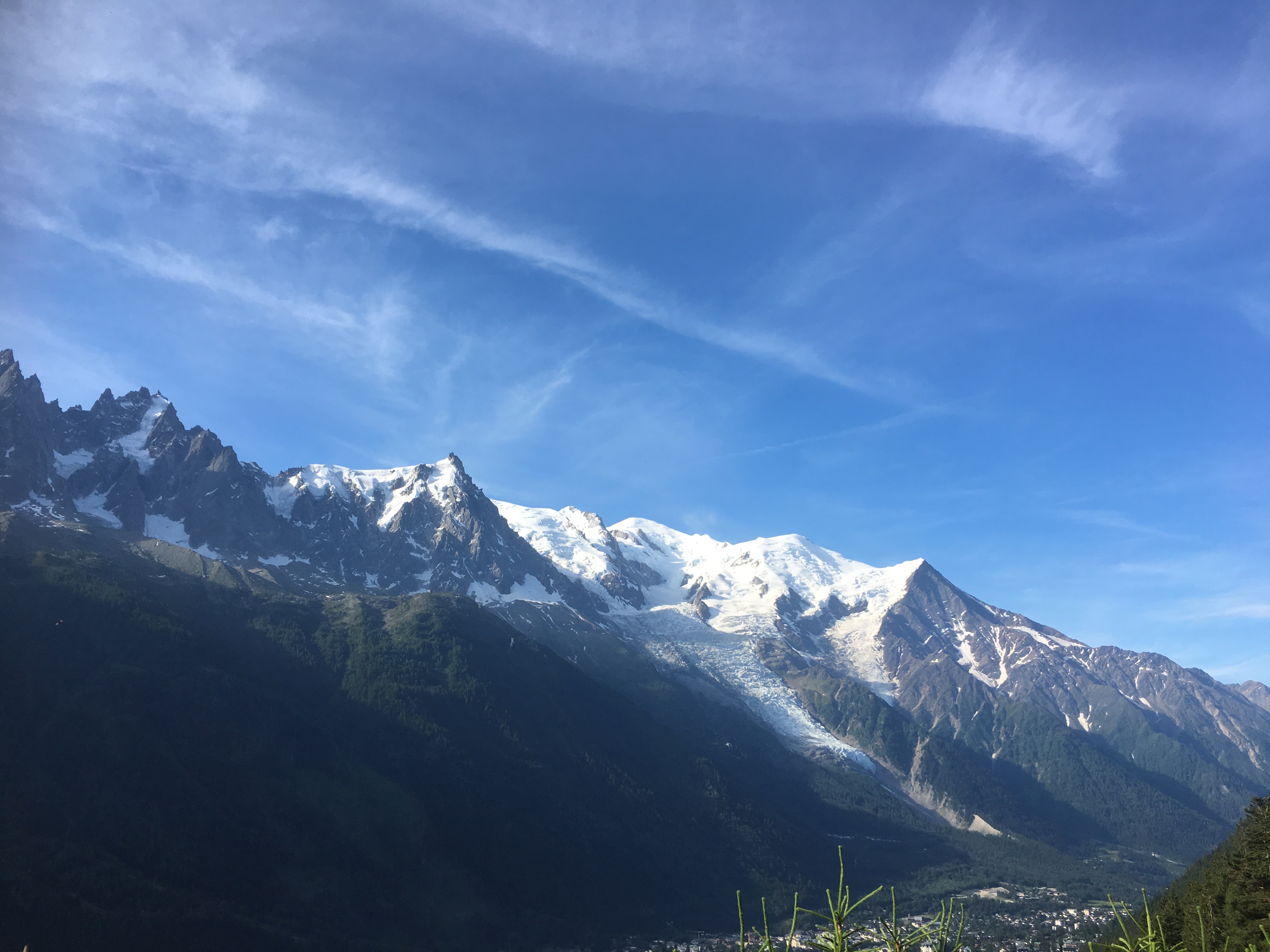 I should mention that the Marathon du Mont Blanc is a bit more then a 42km race. It is in fact a festival of trail races. There is a wide number of races that people can enter and they cater towards a wide range of runners (There’s even a week long expo). However, I want to mention one of the races in particular, that really captured the atmosphere of the week and the place. This was the 80km ultra marathon (not the UTMB) race.

It starts at 04:00 on the Friday (two days before my race) and the cut off time is ~25 hours later. The winner came in at around 15:00 that afternoon and after that people trickled to the finishing line for the rest of the day. And as I was eating my dinner later that evening in a restaurant along the main street, competitors would run by to the finishing line and as they did everyone in the bustling street would cheer them on. The atmosphere was electric.

As the days moved on, I began easing off on the easy runs and began doing important checks on making sure everything I was bringing with me was in good shape and ready for the race. Below is the image of my kit(minus my Salomon Speedcross trail shoes). 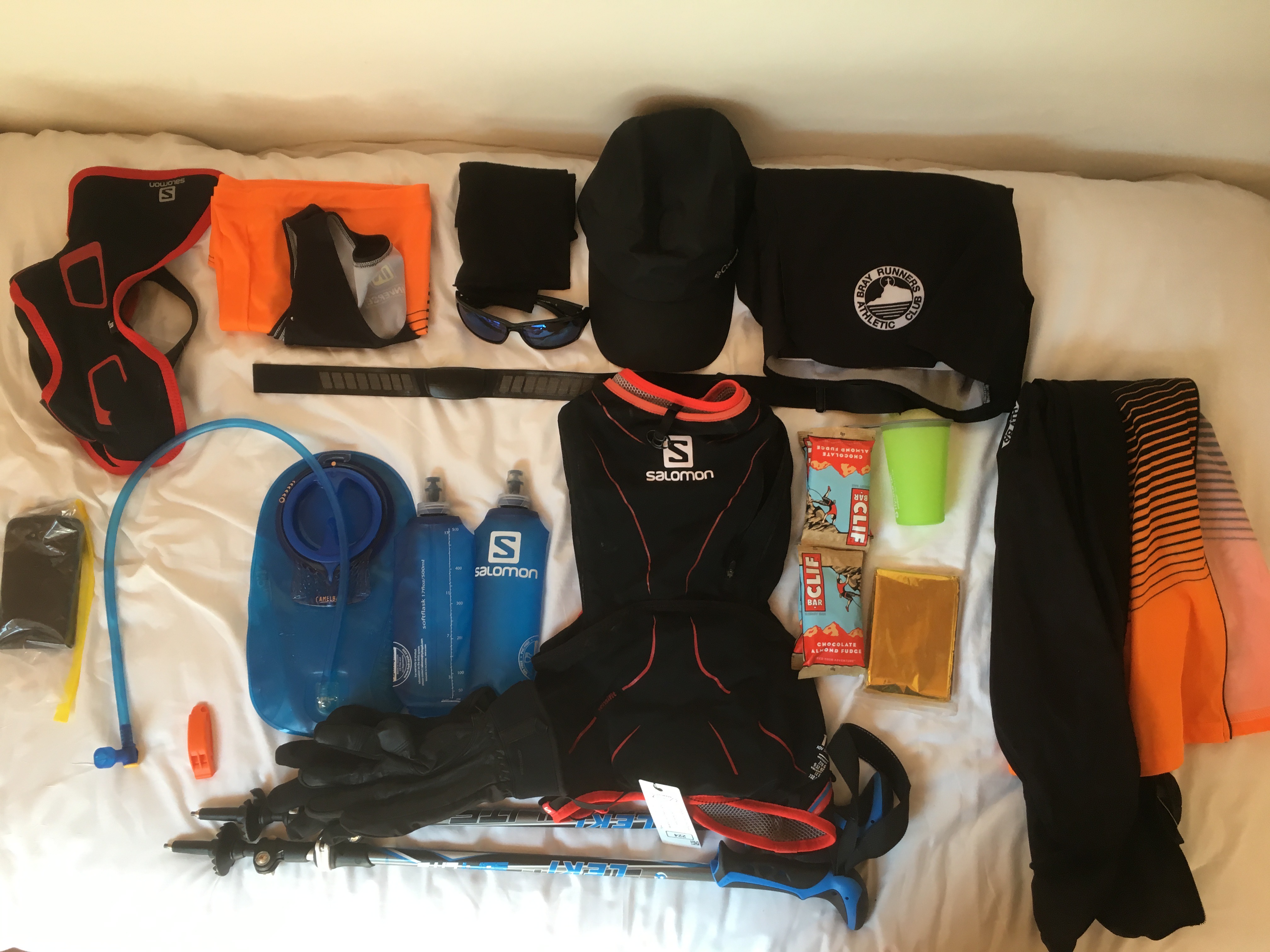 The race officially started at 07:00. However, mine probably started around 03:00 that morning when I woke up to the sound of rain beating against my window. The temperature was reduced to around the mid teens, which was in stark contrast to the mid to high twenties I had experienced over the previous days. I didn’t properly get up until 05:00. By then the rain had stopped and the temperature was still cool, needless to say it was perfect conditions. I had a breakfast consisting of two hard boiled eggs and toast and after that I got all my gear together and walked to the starting line.

Here I was a single person in a sea of athletes about to set off on a trail marathon from Chamonix. To say the atmosphere at the starting line was electric was an understatement. As the organisers counted down “trois, deux, une” I was thinking to myself “what on earth have I gotten myself into”. But as we made our way through the town we were flanked by rows of spectators cheering us along, it was amazing.

We very quickly made our way out of the town and hit a flat woodland area. And as I was running along and settling into the race ahead, I could hearing this oh-so familiar jingle coming from my bag. I had stupidly forgotten to turn off my daily 7 o’clock alarm. So here I was in the middle of a group of runners going at a decent pace, and now I have to dive out of the pack, fish out my phone and turn off the alarm. Great. This was my first and only real hiccup for the rest of the race.

The race course took us from Chamonix to Argentere, then to Vallorcine, up to the peak of L’ Aiguillettes des Possettes (2150m height) then down to Montroc and back to Planprez, which overlooked the town of Chamonix at 2000m.

About 7km from Argentere we had reduced from a mass group to single file, snaking along some amazing forest trails. My one gripe was that you couldn’t see far enough ahead to be able to anticipate any obstacles ahead. I made it to the first food station at Argentere and I was feeling good so I pressed on to Vallorcine (17km). Along the way there, spectators and supporters were scattered along the course shouting “Allez, Allez” or “Bravo Stephen”. Making my way to Vallorcine wasn’t too bad. We had been climbing most of the way up there but there wasn’t any major drags or hills. However, that was to change.

Once I made it to Vallorcine there was another food station. I topped up my water bottles and ate some orange segments. After that I was immediately confronted with my first vertical kilometer climb right to the top of Aiguillettes des Possettes. I took out my trekking poles and began slogging my way up to the top. That was tough and my calves felt like they were on fire. However, once I reached the summit I was surrounded by the clouds and I could only see around 12 feet in front of me. The summit was really long and narrow ridge. At its narrowest the trail was only a meter (if even) wide with a fair drop on either side. We made a sharp decent back into the town of Montroc. My quads took an absolute pounding on the way down. I tried to use the poles to act as a kind of a shock absorber but it didn’t really help.

Once I made it down to Montroc I had done around 27 km. I was over half ways there. However, my legs were in bits at this stage and I still had another vertical kilometer climb left to the finish. I made my way through the forests of the northern side of the valley and I eventually reached the bottom of a ski slope. And there I witnessed the most demoralizing sight in any race I took part in. I saw a line of haggard bodies trudging alone to the top of the slope. At this point the weather cleared and the temperature was beginning to rise. As I made my way I saw another athlete retching on the side of the slope surrounded by race marshals. It wasn’t very encouraging to say the least. I pressed on.

Eventually I started talking to a Norwegian man mostly to take my mind of the last climb to the final food station. He referred to me as Mr Dublin and I called him Mr Oslo. I don’t think a lifelong friendship was born out of that conversation! But it helped me reach the food station.

At this point I was only 5km from the finishing line. I wolfed down a bottle of water and coke, and whatever I could get my hands. From there on I was running on sheer determinism…and sugar. That 5km segment was the hardest run I have ever endured and it was the most rewarding. The trail was narrow with a near sheer drop to my left and I could see for runners in front of me for miles.

About 2km out I was inching along and I could hear the music blaring at the finishing line getting louder and louder. I started to pick up the pace, while being careful not to slip on the loose scree I was running on. Not long after I was 400m meters out and I could see the finishing line. Using whatever I had left in the tank I began picking up speed. I broke into the feeblest sprint and crossed the finishing line after 6 hours 33 minutes. After 4 months of training I finally finished this amazing race. I nearly cried at the finishing line, it was such a surreal moment. As soon as I started to move I could hardly bend my legs. So utilizing my trekking poles as a crutch I hobbled to the refreshments and had a well deserved beer(s).

I would like to thank everyone in Bray Runners, DUHAC and the other clubs in Wicklow who gave me much needed support and direction in undertaking this race, and without it I severely doubt I would have completed it.